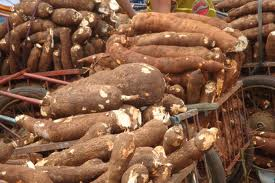 Nigeria is to begin export of about one million tonnes of dry cassava chips to China from this month, Dr Akinwumi Adesina, Minister of Agriculture and Natural Resources said in Umuahia. Adesina spoke at the inauguration of the Growth Enhancement Support (GES) scheme of the Federal Government at the Aguiyi Ironsi Cenotaph.
“Nigeria will earn $136 million just this year as a result of this exportation and this is happening for the first time in our history,” he said. The minister said government would embark on measures that would uplift the capacity of farmers in the country. “We must use cassava to create a whole lot of things and that is why we must double our efforts on cassava cultivation in this country,” he said.
Adesina said that government was also committed to turning around the agriculture sector, and noted that funds had been approved for the empowerment of farmers in Abia. “The Federal Government will be providing N35 million to provide improved cocoa seedlings to cocoa farmers in Abia,” he said, adding that eight varieties of cocoa improved hybrids had been released for delivery to farmers. The yield of the new cocoa hybrid will give you two tonnes per hectare. The average yield we are getting today from cocoa is 0.4 tonnes per hectare and that means you will get five times the yield you are currently getting,” he said.
Adesina said that 25, 000 cocoa pods would be distributed to cocoa farmers in the state. “Each cocoa farmer will also get the approved fungicides and cartons of insecticides,” he said. He lauded the contributions of Abia in cocoa production, noting that the state is the largest producer in the South-East zone.

FG replaces executive board of NNPC