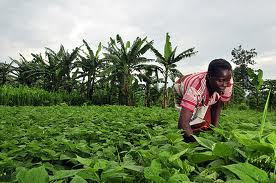 African farmers incur losses amounting to 1.2 billion dollars yearly due to the activities of a parasite known as “Striga” on their crops, the International Institute of Tropical Agriculture (IITA), Ibadan, has said. In a statement in Ibadan, the Institute further noted that farmers regularly lost 40 per cent to 100 per cent of their crops because of this parasite.

The statement, by the IITA Communication Officer, Mr Godwin Atser, said that the problem had been affecting the livelihoods of more than 25 million peasant farmers on the continent. It said that agricultural researchers in sub-Saharan Africa were making progress towards ridding the region of the deadly parasitic weed. `Striga’ is said to be very active especially in the infestation of cereals such as maize and legumes such as cowpea grown.
“The researchers are finding solution to the problem by developing sustainable, multi-pronged management options that smallholder farmers can effectively and profitably deploy in their farms. To control this parasitic weed, farmers commonly use cultural methods and post-emergence herbicides, which are largely ineffective in protecting the crop as most of the damage has already been done below the ground. Although this may provide some relief against Striga, the herbicides are non-selective, and are too costly and unavailable for most farmers to use in the long run.” The statement recalled that IITA was coordinating a private public partnership known as the Integrated Striga Management in Africa (ISMA) project, to develop a package of `Striga’ control options for farmers in Kenya and Nigeria. The project is funded by the Bill & Melinda Gates Foundation and is being implemented in partnership with the International Maize and Wheat Improvement Centre (CIMMYT) and International Centre of Insect Physiology and Ecology (ICIPE).

Others in the collaboration are African Agricultural Technology Foundation (AATF), BASF Crop Protection, and the National Agricultural Research and Extension Services and private sector players in Kenya and Nigeria. ISMA’s main goal is to promote proven `Striga’ management technologies that can be deployed and work in smallholder farming conditions. The four-year project focuses on improving access to `Striga’ control solutions that include using Striga-resistant maize and cowpea varieties among others.

“The integrated Striga control interventions being promoted by ISMA will generate an estimated 8.6-million-dollar worth of maize and cowpea grains annually in project sites in Kenya and Nigeria. We are also optimistic that the interventions will lead to 50 per cent more yields in maize and more than double the cowpea harvest in Striga-infested areas. About 250,000 farmers will directly benefit from the project,” Mel Oluoch, ISMA project manager, said.

Bankers, legislators; learn a lesson of morals from Daibo and others