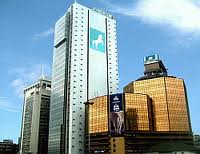 Union Bank of Nigeria on Tuesday posted a 2011 pre-tax loss of N122 billion ($750 million), compared with a profit of N36.5 billion a year ago, it said in a filing with the Nigerian Stock Exchange, giving no reason for the loss. The bank’s gross earnings fell 38 per cent to N80.7 billion, it said, while net assets recovered to N196 billion during the period, from a loss of N115.8 billion last year. A large chunk of the losses are due to write downs of bad debts left over from a 2008/9 banking crisis. The bank’s shares shed 4.35 per cent to N3.72 on the news, almost the maximum 5 per cent swing allowed, and underperforming the broader index, which gained 0.55 per cent to hit 21,690 points. Union Bank last year sold a 60 per cent stake in itself to a group of institutional investors led by African Capital Alliance private equity for $750 million to help it recapitalise. It was one of the nine lenders that the central bank bailed out to the tune of $4 billion in 2009, after it judged they were undercapitalised