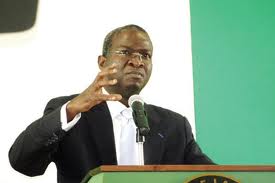 The Federal Government has said it would require a minimum of N500 billion annually for the next three years to develop its 35,000 kilometres network of roads, saying work is ongoing on 13, 000 kilometres of the network. Minister of Works and Housing, Mr Babatunde Raji Fashola disclosed this yesterday in Abuja when he granted audience to the Press Corps of the ruling All Progressives Congress APC. Fashola said if past administrations had shown commitment to developing road infrastructure like the President Muhammadu Buhari administration, most of the roads would have been completed. He said; “We inherited a number of roads and we resolved that we were going to complete as many of them as possible. Many of these roads, some of them started in 2007, some in 2006 and others are even older, but unfortunately for reasons that we can only imagine, at a time that the country was earning more revenues, up to $100 per barrel, the total budget of this country was N4 tr. It is now that the country is earning very less, $40 per barrel that it is budgeting N13 tr. So, those roads should have been done before we came. Even the ones done by the state governments were not paid for, and so we are just paying.

“I think that a minimum of half a trillion every year over the next two, three years would be a strong support to really advance and complete as many as the 711 contracts we have. Again, some people are mistaking these contracts to mean roads. No. For example, on Lagos-Ibadan expressway, we have one road but two contracts. On Benin-Lokoja, we have one road but five contractors. So, the totality of these are 711 and the total road network now under construction or rehabilitation is a little over 13, 000km in different stages of repairs out of the total federal road network of 35, 000km”. He added that due to different climatic conditions in different parts of the country, the materials used to build roads react differently, explaining that this was why the ministry decided to also use different construction components for different areas. Fashola also blamed the nonchalance of some Nigerians for the rapid decay of roads been constructed by the government.

“How do we get the best out of these roads? It is to use them properly. We must stop abusing the roads. Let me tell you some of the ways we abuse roads. I have told you we have designed to some of the highest conditions but the more we design, the more some of our people exceed their axle load. The maximum axle load is 45 tons but people are now carrying 60 tons. So, if you have something designed for a particular capacity and you are using it for something in excess of the design, it is going to fail. The other way of abuse has to do with those who do trucking business, whether it is those who carry food, petroleum products or other things. They must go and get truck parks. Once you run a fleet business, go and get a place to park your fleet. You cannot pass that burden to the government. The government is not involved in trucking business. Government is responsible for providing a reliable road network for you to transport your goods and services. There is a part of the road that is called the shoulder. That is where trucks park and that is where the damage to the road starts. That is where they drop diesel too and once they drop diesel, the road starts to disintegrate. Most of the road components, the bitumen and the asphalt and also petrol or diesel are products of the same hydrocarbons, but they do different things. So, once you start pouring solvent on binding components, the road starts to disintegrate. Those who sell diesel by the roadside are the first people destroying the roads, those who sell petrol by the roadside are the first people destroying the roads. Those who park on the shouldery are also destroying the roads because once you create that weak point, water seeps under it and the road begins to fail from under, not even the top”, the minister lamented.