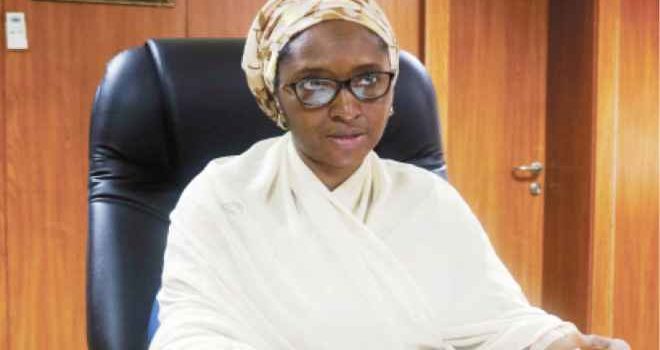 The Honourable Minister of Finance, Budget and National Planning Mrs Zainab Ahmed has said that the net oil and gas revenue inflows to the federation account in the first three months of 2020 amounted to N940.91 billion. This represents a shortfall of N425.52 billion or 31.1per cent of the prorated amount. Giving her brief at the nation’s virtual Economic Council meeting she said “to prevent a deep recession arising from the COVID-19 economic crisis, the orthodox approach all over the world, which is also in the works in Nigeria, is to deploy a stimulus package.

Zainab said “Nigeria is faced with perhaps the most challenging economic challenge in its history. Giving a briefing at the virtual National Economic Council Meeting she said that Nigeria’s economy could shrink as much as 8.9 per cent in 2020 in a worst-case scenario without stimulus, a deeper recession than forecast after oil prices plunged due to the coronavirus pandemic.

Ahmed said that the contraction could reach 4.4 per cent in a best-case scenario, without any fiscal measures. But with stimulus, the contraction could be kept to just 0.59 per cent, she said. The pandemic and an oil price plunge have not only hit growth but also dented the state’s main source of income, creating large financing needs and weakening the Naira. “We will go into recession – but what we are trying to do is to make sure that it is shallow so that we will quickly come out of it, come 2021,” Ahmed said at the council in a virtual meeting. She said 40% of Nigerians were poor and the crisis would increase poverty. Ahmed said Nigeria had over 6,000 confirmed cases of the novel coronavirus, but that this could rise to almost 300,000 by the end of August. So far 200 people are confirmed to have died with the virus.

A World Bank director taking part in the meeting said the Bank was planning a package for immediate fiscal relief for Nigeria. Ahmed said the proposal was worth $1.5 billion and intended for Nigeria’s states to provide relief at sub-national level. She said it could be disbursed by September.

Ahmed said that the global economy is also facing its sharpest reversal since the great depression and these have health and economic implications. She said that COVID-19 has resulted in the collapse in oil prices, stressing that this will impact negatively on Federation revenues and Foreign exchange earnings”.

Members of the National Economic Council it was gathered rose from their first virtual meeting with a resolution to ensure a more effective synergy between the Federal Government and the sub-nationals especially in matters related to the fallouts of the COVID-19 pandemic, including how to effectively and efficiently reopen the Nigerian economy after the lockdowns and shutdowns across the country. Chaired by Vice President Yemi Osinbajo, SAN, the Council, composed of all the 36 State Governors, the FCT Minister, Central Bank Governor and other top officials of the Federal Government, specifically decided today to set up a lean committee of seven to work with the Presidential Task Force on COVID-19. A Committee to be led by Delta State Governor, Dr. Ifeanyi Okowa was set up and also includes the Governors of Lagos, Kano, Bauchi, Anambra, Plateau, and the FCT Minister.

According to the Vice President, the Committee will ensure that there would be an even more effective collaboration and coordination between the Federal Government’s Presidential Task Force and the States of the Federation including the FCT. Besides, NEC also resolved to cooperate with the Economic Sustainability Committee set up by the President and chaired by the Vice President in the development of a national Economic Sustainability Plan. Such a plan is expected to introduce a substantial stimulus package running into a couple trillion Naira, ensure that Nigeria as a country gets through the COVID-19 economic challenges and in fact chart a path of growth and development for the Nigerian economy by ensuring massive productivity in several sectors including agriculture, power, infrastructure, technology and several others. To this end the NEC resolved to hold a meeting next week with the ESC. The Council would be represented at the meeting by its earlier constituted Special COVID-19 Committee.