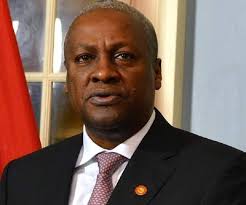 Former Ghanaian President Dramani Mahama has asked the Nigerian authorities to open its borders in the interest of ECOWAS. He said the unilateral closure of the borders since August by Nigeria is a worrying development for the growth of free trade in the sub-region. Speaking at the seventh anniversary lecture of Realnews Magazine in Lagos, Mahama said it was unfair that the sub-regional economic activity and trade should suffer because of domestic institutional weaknesses in Nigeria. He urged Nigeria to invest in strengthening its institutions and systems that are responsible for preventing the importation of illegal or prohibited goods.

Mahama, who spoke on the topic: “Beyond Politics: An Economic Narrative for West Africa”, said he understood the harmful effects of unbridled smuggling of goods on the growth of local production in Nigeria. “The total closure of, especially, the Benin border is having a significant toll on many small and medium businesses, especially in Togo, Ghana and Cote D’Ivoire that rely on this inter-country trade. “I am sure that businesses in Nigeria that rely on supplies from these countries are also suffering. With the signing of the joint border task force agreement between Nigeria and her neighbours, I would like to take this opportunity to appeal to Nigeria to open up her borders so that economic activities can resume. As the largest economy in West Africa, I believe it is not by accident that Nigeria is home to the headquarters of the Economic Community of West Africa States. The import of the following quote from the objective principles for the establishment of ECOWAS cannot be lost on us.

ECOWAS was set up to foster the ideal of collective self-sufficiency for its member states. As a trading union, it is also meant to create a single, large trading bloc through economic cooperation. “Integrated economic activities as envisaged in the area revolve around but are not limited to industry, transport, telecommunications, energy, agriculture, natural resources, commerce, monetary and financial issues, social as well as cultural matters. As a former Chair of the ECOWAS Authority of Heads of State and Government, I have an abiding interest in the progress of ECOWAS and its people.

“I believe that as an economic and regional bloc, a lot of economic opportunities are available to us, and we must take advantage of them. Back home in Ghana, I also look forward to our government’s intervention that brings an immediate cessation to the forceful and illegal closure of shops of foreigners, especially Nigerians, by members the local trade associations.

“The uptake of science and technology in all sectors of our economies will allow Africa to leapfrog its development. Africa needs not go through all the stages of industrialisation the developed countries went through. Today, biotechnology and tissue culture would allow us to multiply agricultural productivity tenfold. Use of innovation will allow us to increase productivity and free more people from back-breaking labour and allow them to pursue careers in services, tourism and the arts,” he said. The former president said Africa should grow its SMEs and blue collar labour. He said SMEs and middle level blue collar manpower had been the main drivers of growth in middle income Latin American and Asian economies. “This means that our educational curriculum must be rejigged to produce the skilled human resources to drive this sector. Technical and Vocational Education and Training, TVET, must be rebranded to be a career of first choice, rather than the humbler alternative when other doors of progression in the grammar schools and humanities track had been closed to a student.

“Despite the end of the Millennium Development Goals, we must strive to achieve the basic goals of universal enrolment of African children in school. We still have nearly 30 percent of African children out of school. We must also work to keep them in school, especially with the girl child. Keeping girls in school till post-secondary means less early child marriages and also delays the onset of pregnancy till well after 18 years of age.”

Mansur Muhtar, vice president, Islamic Development Bank and chairman of the occasion, said despite decline in oil revenue, oil will remain important in the medium-term for Nigeria. He said Nigeria will continue to be a big player in the international oil and gas market. He urged Nigerian government to address the security and stability challenges to optimise the production capacity and diversify the economy to reduce oil dependence. “Nigeria is still a big player in the international oil market and largest oil producer in Africa, ranked 12th in the world; second largest amount of proved crude oil reserves in Africa; largest natural gas reserves on the continent and domestic: production below potential, due to supply disruptions and low investment; global: Oil prices likely to remain low due to large supply and stagnating demand,” he said.