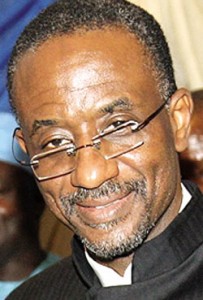 The Monetary Policy Committee (MPC) of the Central Bank of Nigeria (CBN) on Tuesday in Abuja retained the Monetary Policy Rate (MPR), also known as lending rate at 12 per cent. The CBN Governor, Malam Sanusi Lamido Sanusi, said this while briefing journalists at the end of the MPC meeting. The committee meets every month to review and take monetary decisions.

Sanusi said Nigeria’s external reserves had increased to $38.72 billion as at May 17 from $36.66 billion in April, representing an 18.63 per cent increase over the level in December 2011.
“The increase reflected generally favourable commodity prices and inflows of capitals in response to the removal of restrictions on repatriations and high domestic interest rate as well as stable exchange rates. The committee noted the assurances of the bank that the total hot money in the system is under strict surveillance and that the bank is satisfied that the figure of 5 billion dollars does not pose a significant threat to the financial stability of the country in view of the current level of reserves. On the decision to retain the MPR, Sanusi said the apex bank was concerned about a slowdown in global economic activity and lower crude oil prices.

MPR is the rate at which the apex bank lends money to commercial banks for on lending to customers- this rate influences interest rates at any point in time He said the bank was equally concerned about the sharp decline in domestic oil production due to massive oil theft in Niger Delta and a drop in the agricultural output because of insecurity in some Northern states of the country.

“It was the committee’s view that at this point in time the trajectory of prices and output is more dependent on fiscal and structural policy than on monetary policy. The sluggish growth in credit, the stable exchange rate, the healthy reserve position and the benign month-by-month inflation do not suggest a need for further tightening at this point. Also the reasons given for the slowdown in our agricultural growth and oil sector will not be addressed by monetary easing.

“The decision therefore decided by unanimous vote to maintain the current stance of monetary policy without discounting the possibility of changing it should economic and financial conditions warrant such in the near term.’’
The CBN governor said the Committee also kept its +/- 200 basis point corridor while the Minimum Liquidity Ratio was retained at 30 per cent and the Cash Reserve Ratio (CRR) at 8 per cent. He said the committee was equally concerned that the increase in electricity tariff proposed for June 1 might lead to “further inflationary pressures.’’
“The Committee noted that since its meeting in March 2012, the uncertainties surrounding the global economy remained elevated owing to economic slowdown in France and major emerging economies as well as the financial threats in key emerging economies. These developments will have an impact on the domestic economy through the trade and financial flow channels weakening the external and fiscal positions.

“Monetary policy on its own has limitations with respect to inducing growth without fiscal and structural measures relating to petroleum, power and infrastructure sectors.

“The committee reiterated the need to recognise the short-term nature and limits of monetary policy. The growth and development of the Nigeria economy will continue to be risk so long as progress is not made in structural reforms.’’ Sanusi said the committee noted indications that the robust output growth recorded in 2010/2011 might not be replicated in 2012. He cited provisional data from the National Bureau of Statistics which indicates that real GDP in the first quarter of 2012 grew by 6.17 per cent down from 7.68 per cent in the fourth quarter of 2011 and 7.13 per cent in the corresponding period last year.

The CBN governor said growth in agriculture in the first quarter of 2012 also declined to 4.15 per cent compared with 5.54 per cent in Q1 of 2011 and 5.74 in fourth quarter 2011. “In general, the paradox of rising poverty incidence in the face of impressive economic growth further reinforces the committee’s call for the implementation of appropriate structural reforms in the key sectors notably agriculture, power and the petroleum sector to stimulate productivity.’

Central Bank of Nigeria Communiqué No. 83 of the Monetary Policy Committee Meeting of Monday and Tuesday May 21 and 22, 2012

ISSAN Confab: CBN to Collaborate with Stakeholders to...

Zenith Bank emerges Bank of the year in...

Problem with Nigeria’s debt, not size but huge...